Congress is expected to pass the latest stimulus. The Senate has approved the 1.9 trillion dollar American Rescue Plan. Most of us are thinking about the $1400 stimulus we'll receive.

However, 7 lines in the 630 page bill will make a huge tax difference for a lot of gig economy workers. HR 1319 section 9674, makes a huge change in when income is reported for what are called third party transactions.

This means that many contractors with gig economy companies like Uber (including Uber Eats) and Lyft will be getting 1099 forms when they previously wouldn't have.

It also means that many will get two different 1099's.

This section does not change anything for gig workers who receive 1099-NEC forms from apps like Grubhub, Doordash.

How exactly will this change in the American Rescue Act impact taxes for Uber Eats, Uber, Lyft and some other gigs?

Section 9674 of the act includes an amendment to the Internal Revenue code. This is the amendment:

Why's this a big deal?

Third party payment networks didn't have to send out a 1099-K unless you made $20,000 or more per year. This little change drops that amount dramatically to $600.

Technically, this shouldn't change anything. You're required to report your income whether you received a 1099 or not.

That said, it IS going to be a big change for many. A lot of people think if the government doesn't know I made the money, I don't have to claim it. Starting January 2022, the government WILL know about a lot more than they do right now.

That will force more people to pay taxes.

You and I know that. They just don't want the government to know it.

It's all about Uber, Uber Eats, and Lyft making a case that they're not our employers.

Ultimately Uber (and Uber Eats) and Lyft position themselves as connecting us to passengers rather than actually being service providers. They say that it's actually the customer paying us, they're just the payment processor.

Thus, they report our income as though they are payment processors, which means they use a 1099-K instead.

This is why a lot of Uber Eats, Lyft, and Uber contractors can make thousands of dollars without receiving a 1099. Payment processors didn't have to send out a 1099 unless you made $20,000.

This is going to be a rude awakening for a lot of drivers. Now they'll have their income reported at the same threshold as contractors with Grubhub, Doordash, Instacart and others who use 1099-NEC to report earnings.

This is because they report different income differently.

Fares, delivery fees and tips are reported on the 1099-K. This is because that's the money they are claiming came directly from the customer.

Incentives and promotions that are paid out by the gig company (thus not from the customer according to their narrative) are reported on a 1099-NEC (or were reported on 1099-MISC prior to the 2020 tax year).

It will now be far more likely to get more than one 1099 from Uber/Uber Eats and/or Lyft.

This will really create confusion.

You could get two different 1099 forms from Uber / Uber Eats or Lyft for the same year. You'll wonder, was it a mistake? What's wrong with this picture? Which one is the right one?

There was no mistake. They're both correct and you'll need to report both. As mentioned above, the 1099-K only reports your tips, fares and fees, and the 1099-NEC only reports incentives and promotions paid directly by the platform. They both add up to what you actually made.

Okay, Uber and Lyft complicate things here. You'll find that the total that Uber and Lyft report actually is more than you received. That's because they report higher payments than what you received. The difference is what they call a service fee, kind of like processing fees you pay to Paypal or Stripe or other payment processors. You'll need to make sure to deduct those fees on your Schedule C.

This is already happens with a lot of full time drivers. They made more than $20,000 in fares, fees and tips, AND they made more than $600. But now it's going to happen to more drivers since the 1099-K reporting amount has been lowered so dramatically.

Some independent contractors already experienced this rude awakening this year.

Many of those states are already at the $600 level. Some are somewhere in between.

This addition in the American Rescue Plan will maybe simplify things now by making it a requirement nationwide.

What should Uber/Uber Eats and Lyft contractors do because of this change?

Technically you shouldn't do anything differently. You should be reporting your income either way.

Understand nothing is changing in what taxes you have to pay.

Brian Faler had a good article in Politico about this topic. I didn't agree with his headline though: “Gig workers could end up losers in Covid relief bill.”

But he does a good job pointing out how this will be a big change for a lot of self employed individuals. A lot of sharing gigs like Airbnb, VRBO, HyreCar and others either report via 1099-K, or they pay you via a processor like Paypal.

Just like Uber and Lyft, income for all of these will be reported now at lower levels.

But here's the thing to understand: Nothing about this changes anything about your tax requirements. I think that's what the Politico article misses.

The only thing that changes is when your income is reported.

Double down on tracking your expenses and miles.

If you've managed to duck under the radar in the past because of the higher 1099 reporting requirements, things are going to change.

Your income for 2021 is more likely to be reported. That means you'll be forced to file when maybe you weren't before.

You may not have paid attention to expenses because you weren't reporting your income to begin with. If that's you, you'll need to start paying attention to how taxes work.

The good news is, you're not taxed on what's reported. Your taxes are based on your profits. In other words it's based on what's left over after your expenses.

This means you need to track your expenses. Most of us use our cars, and the mileage deduction we can claim greatly reduces our taxable income.

Other expenses that are necessary and ordinary for your delivery or rideshare business can also be claimed. And the beauty of it is, you do not have to itemize your deductions to claim your expenses. You file your expenses on a Schedule C. This means you can claim your expenses and still use the Standard Deduction on your personal tax form.

Get a good app for tracking your expenses and miles. I reviewed the best mileage and expense trackign apps here, and the one that I found was the best all around was Hurdlr, which has a free and a more robust paid version.

It's time to learn bookkeeping as an independent contractor for Uber/Uber Eats Lyft and any others. Keep a record of your expenses.

If you have been already reporting your income even when not getting the 1099-K, nothing changes for you. If not, this change could increase your tax bill substantially. Tracking your expenses will soften that blow.

Start setting money aside for taxes.

No one's withholding money for your taxes for you. This is a lot different than as an employee.

We've got a series of tax articles for gig contractors in our tax guide that can help you understand how taxes work.

Hurdlr has a fantastic tax calculator as part of its app. You create a tax profile with your filing status, dependents and other income. Hurdlr uses that profile to calculate what you can expect to pay.

If you don't use Hurdlr, you can learn more here about ways to calculate what to save for taxes.

The main thing is, if you haven't been reporting income because you never received a 1099-K, things are going to change for you. In a big way. As I write this it's still early in 2021.

You have a lot of time to prepare. 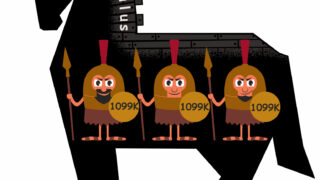