If you've heard of Sam Lyon's big month you may be wondering, is it really possible to make $100,000 a year delivering for Uber Eats?

Sam was impacted like a lot of people, losing a lot of income thanks to the pandemic. So, he decided to see how much he could make in a month delivering for Uber Eats.

Understand, Sam isn't trying to make that much in a year. His experiment was for the month of June, where he delivered twelve hours a day, every day. For 360 hours in June, he delivered, and documented his journey.

Did it really happen?

Sam's story was picked up by a number of news outlets. You can see one report on CNBC here.

It was interesting reading the comments on the Youtube version of the video. Most people seemed to completely doubt the story.

It's just a publicity stunt by Uber Eats, no one really makes that much money.

Yeah but what about all the wear and tear on his car. He’s not really making that much money.

You ever hear of the crab in a bucket mentality? You get a bunch of crabs in a bucket, and one tries to get out and the others will pull it back down.

That's what the response I see reminds me of. So let's talk about this – is it really fake? Is it completely impossible? Is it sustainable.

That's not an unheard of rate. In fact, this past June my Uber Eats deliveries averaged just over $34 per hour. If you stretch that out over 360 hours, that's a heck of a lot more than $8300. So yes, it is absolutely possible.

Granted, if I did it for 360 hours, I probably wouldn't sustain that pace. But right now in these conditions, there are a lot of couriers making well north of $23.21 per hour.

So yes, it is absolutely possible.

In fact, if you ramp it up and are able to work multiple platforms during the slower period, I would say it's possible to go over $10,000.

I think the bigger question is, is 12 hours a day, every day, sustainable?

Notice that Sam Lyon isn't reported as trying to do this every month. He was trying this for one moth.

Twelve hours a day, 30 days of the month, that's something that if you wanted to really dig in and make it happen, you could do that.

I won't say it's not possible. In fact I know there are people who do it. Not doing delivery, but in higher level positions. Ask a major college or pro football coach how many hours they work. Check in with the CEO of some major companies.

I saw this report on Nick Saban, football coach for the University of Alabama. It wrote in glowing terms about Saban's 100 hour work weeks. It's interesting that he is celebrated in this article for his work ethic. But for some reason when just a salt of the earth person wants to go kill it, we want to say “yes, but….”

It happens. So yes, I would say it's sustainable.

But is it a good idea?

I'm not going to weigh in on that one.

I mean I will say, I’m not going out there 84 hours a week. I have too much else going on – my family time is more important to me, this having a life…  but that doesn’t mean that for someone else that’s wrong for them to do that.

We love to talk about work life balance. I think it's a very important concept. There are mental health issues, there are burnout issues.

But I can also tell you that I would have a higher risk of burning out in some corporate jobs than I would 60 hours plus doing delivery. Here's the thing: you go out, you deliver, you come home, and the work doesn't follow you home.

There are a LOT of people who can't say that in a standard W2 work environment.

So why do we rip on Sam for putting in as many hours as he did? Do we think that it's some how unfair that he did that. Somehow that takes away from what he accomplished?

How many people are sitting at home crying about only making a certain amount of money in their job, yet what are they doing with the rest of their time? Gaming, watching tv, surfing the internet? Why is that more noble than Sam's putting the time in?

It's not for me to say what is healthy or reasonable for someone else to do. I would say that for some people, it might not be healthy. For others, it's not a real problem.

One other piece of the sustainability puzzle.

I do have one thought, that earning $8,357 in June of 2020 does not mean that level of earning can be sustained for a full year.

I don't know about Salem Oregon, where Sam delivered. I do know that my June earnings were probably a good 20% higher profit per hour than during ‘normal' times. There are more deliveries happening because of people staying home. In my market, deliveries are MUCH faster.

If things get back to normal, if there ever really IS any such thing as normal, I'm not sure Sam would continue to earn at the pace he was earning.

Or maybe he would? Maybe he'd earn more. From what I gather, he's pretty new at this. As he learns the ropes and gets more efficient, maybe his increase in earnings form that would offset that drop off.

But hey, let's say that things normalize and all Sam can make in August is $7,000.

How much did Sam Lyon REALLY make?

Sam did report that he had $499 in gas expenses. He also had an oil change.

So, right there, his actual earnings were already lower.

I will say that his actual earnings were quite a bit lower than a $100,000 pace. Remember that as independent contractors, we've got costs out of our pocket. The car is a huge one.

His car costs him more than just gas and an oil change.

If you listen to me much, you know that I preach this about your car: It costs a LOT more to operate than just gas and the occasional oil change. You can go back to episode 18 in the podcast or read the post here to read more about what your car actually costs. I couldn't tell exactly what Sam was driving, it did look fairly new. I'm going to estimate about a 35 cent per mile cost of operating that car.

I'm a broken record about this car thing. I call it a credit card on wheels because most of the costs you're racking up are things you'll have to pay for later. We don't think about the tires we'll replace or the timing belt change. We shrug off depreciation – but the thing is that all the miles we put on our vehicles mean we're getting a lot less for our cars when we sell them or trade them in than we would without those miles.

I would be surprised with a newer vehicle if his overall cost is less than 35 cents a mile. Okay, 4,844 miles comes out to $1,695 in overall vehicle costs. Subtract that from what he made, and now we're at $6,662 actual profit.

And then there are the taxes.

I'm not jumping on the taxes bandwagon as much as a lot of people. I saw that a lot in comments, that hey, he's got taxes to pay.

Now there is a bit of extra tax for the self employed that a regular employee doesn't pay. We have to pay both the employer and employee portions of social security and medicare taxes. What that means is we pay 7.65% higher taxes on our taxable income.

But there are some tax breaks as well. The bottom line is, when you figure the breaks in, if Sam's only expenses that he claims are his 57.5 cents a mile, Sam's tax bill is $276 higher than the employee at $6,662 per month.

Adding it all up.

So here's what it boils down to:

At $8,357, having driven $4,844 miles, once you take away the ACTUAL cost of running his car and the extra that Sam pays in taxes, Sam has the same amount of money in his pocket as a person making $6,386.

And then there's overtime. Sam worked 176 hours overtime. If he's getting time and a half, what that boils down to is Sam made the same amount of money after expenses and as an hourly employee who made $14.25 per hour.

Now I'm not sure that's a fair comparison when you kick in the overtime. What hourly job will let you work 84 hours a week? Usually at $76,000 a year, they're going to stick you on salary anyway…

How important is all that?

I'd love to get a chance to talk to Sam and get his thoughts. To be honest, I don't think he's worrying about whether or not he made the equivalent of $14.25.

Here's what Sam knows: He's got $8,357 in his bank because of all his time. And he knows that taxes and car expenses will come out of that, but you know something? There's still a LOT of money left over after all that.

A lot more money that most of the haters who are tearing down what he's accomplished.

This is the most important take away to me.

In the end, it's about Sam making the choice to go out, haul ass, and make some good money.

I think Sam’s story is a fantastic endorsement of this delivery thing for that very reason. It doesn't matter if his actual earnings are closer to $6,000, that's still a LOT of money for what you would think you could make doing deliveries.

It's not important how many hours he put in or if you think you wouldn't want to deliver for 84 hours a week. The important thing here is, it's what Sam wanted to do, and he has a lot of money in the bank because of that.

The lesson here? It’s up to us.

If I want to balance delivery work with my website and my family time, I get to do that. No one can tell me I can’t do that. And if I want to go deliver for 12 hours a day for a month, that’s awesome, go do it.

Sam proved it. My hourly rates show it's possible. If you want to put in the hours, you can bring home a lot of money. If you don't want to put in as many hours, it's still possible to make some good money at this.

And by the way, in case anyone is interested…   butt ton is an actual measurement. Ass ton however, is not.

Here’s the point I’m getting at: YOU get to choose. That’s the beauty of it. This is what I love about being my own boss – it’s MY decision to make. It was SAM’s DECISION – not yours and not Uber Eats or anyone else. So Sam Lyon, good on you, my man. You can decide to just work your face off and make that $8,000. Maybe even $10,000!!! Or you can choose to work it around other things, around your why.

If there’s anything from this week to take away, that’s the thing.

If you choose to put the time in and do it.

YOU GET TO BE THE BOSS. 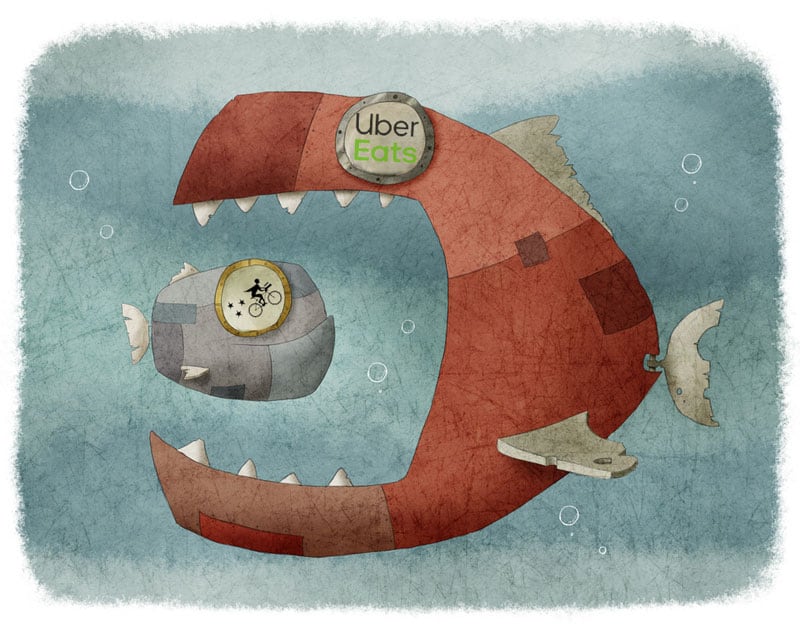 Next →
What is it like delivering for Uber Eats?
Comments are closed.